Excerpt. Subject is in his mid-thirties, white, brown hair, casual dress. Wife and kids are in the vehicle waiting patiently.

Hummer Owner 4: What you’re saying is that because these are on the road, it puts other people at risk if they’re in an accident?

Me: Right. In a way you are trading your safety for those who you might be in an accident with.

Hummer Owner 4: Yeah, I guess you could put it that way. But the tractor trailer is on the road, too, and that’s part of commerce, getting goods from one place to another. So there are items on the road that are much heavier than these vehicles are. It just so happens that, as far as passenger vehicles, these are the heaviest. But I don’t think there’s anybody out there that wouldn’t trade their family’s safety for another. As far as a father and a husband, I am looking after my family. Which I would imagine that whoever owns a Hummer, they’re looking out for their family as well. So I don’t know if you could view that as a negative.

Me: For me the jury is still out. It’s like if you are on a ship and it’s sinking, and you have a limited amount of life-vests. You’re going to give them to your kids, right?

Me: Yeah, and I am not sure this is appropriate, but if you were using this metaphor, would you grab life vests away from a family to give to your kids?

Me: But a part of the reason that I am doing this project is that a Hummer seems like a very political purchase, as opposed to some other cars. I know that a lot of the people who purchase it, they don’t say “I am going to buy this because it makes a political statement.” It’s part of my position that when we purchase things, we vote, and it’s one of the most powerful ways we vote. If a thousand people start buying Chinese lawn chairs – well maybe not a thousand people, but as the nation shifts to buy more and more stuff from China, our international politics start to give China the blessing on their labor practices.

Hummer Owner 4: Yeah, but as far as I know, this is an American-made car, it [Hummer] is owned by General Motors, based in Detroit. That’s America still.

Me: I was just thinking about when I purchase tennis shoes, I’ve been buying New Balance Shoes, and they used to make all of their shoes in the US. But a lot of them are made in China now, and I look for the models that are made in the U.S. because I like supporting American companies…

Me: So I am aware when I buy my shoes that it’s a political vote in a way, it’s putting my resources somewhere and saying I support this or I support that.

Hummer Owner 4: Yeah, you’re right, I guess that, kind of reeling it back in to the immediate issue, to wrap it up, it’s a safety issue more than anything else. When I went to decide what kind of car I was going to buy, I decided on what car my family was going to be the safest in if they were involved in an accident. Really. And at the end of the day, that was it.

Me: The question that I’ll end with – and I am not sure where I stand with it – is that there is safety in car accidents, and then there is safety in our general political environment. Are our kids going to be fighting in wars – is terrorism going to continue to be as much of an issue –because of the Middle East, or would it be less so if we are less dependent on foreign oil?

Me: And I think that people go through different phases of how they feel about things, largely related to their kids. So when we have infants, who are so vulnerable, the thought of car accidents is so horrific.

Me: It might be that when your kids are seventeen, foreign policies and war will be more of an issue on your mind because you are thinking about their friends going off to war. Because I know people, a kid who I was in the Boy Scouts with, is now a sniper in Afghanistan. So it was more on my mind when he joined up.

Hummer Owner 4: Sometimes people view themselves as out on an island, as well, where they are worried about their immediate situation and not so much with the trickle down effects of geopolitical stuff. So I don’t know.

Me: Well I appreciate it, you’ve been real open with me and...

Hummer Owner 4: Thanks for the picture and I hope this helps with your research. 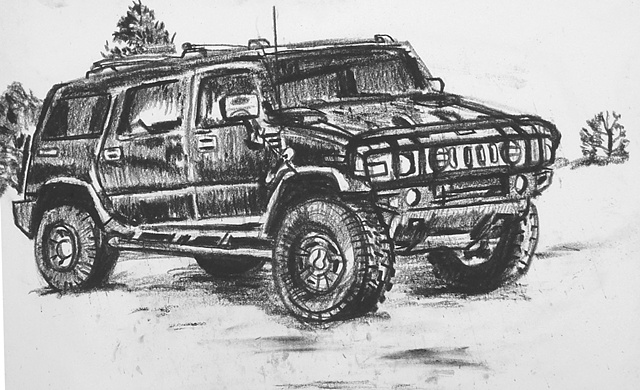